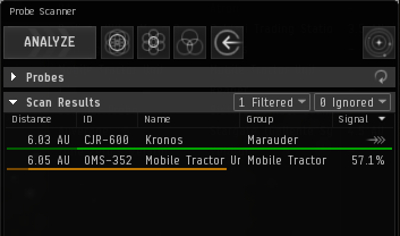 To use the Probe Scanner I needed to fit a probe launcher to my ship, and unfortunately my little interceptor didn’t have a lot of CPU for fitting one. Instead of doing the smart thing and finding a new ship that could fit one, I decided to fit a Co-Processor II, which gave my interceptor just enough CPU to fit a Sister’s Expanded Probe Launcher. I would then carry my guns and other combat-related modules in my cargohold, and refit for combat at the nearest station after scanning an MTU down. Not the most efficient way of doing things, but I managed to rack up an impressive 90+ kills using this method.

Throughout that period I had been training the skills needed to use a type of ship that had been introduced to the game during my hiatus, the Tactical Destroyer. I decided to go for the Gallente variant of this ship, the Hecate, as most of my skills at that time were suited for it. I will go into more detail about this ship in a later post, but I will mention that with more than twice the DPS of my interceptor, over 4 times the cargo capacity, and a bonus that allows for easy fitting of a probe launcher, this ship would be the perfect MTU hunting ship.

Anybody for some planking?

With this ship, my MTU/hr ratio went through the roof, and I could now hunt down and kill MTUs quickly and efficiently. Now that I had the skills and tools necessary for MTU hunting, I headed out to the most lucrative mission hubs, the busiest trade hubs, and the quietest systems in the farthest reaches of empire space. Would I find riches beyond my wildest dreams, or would I find oblivion? Would I find adventure and experiences worthy of sharing, or would I find disappointment?

Add this blog to your bookmarks, and keep reading, to find out.