In a previous post I detailed my corporation’s largest payday from POS bashing, in this post I will tell you about an incident that occurred just a couple of weeks later, in what was supposed to be just a routine operation.

The first time I ever saw the name Lower Debyl, I’ll admit I chuckled to myself, it is a strange name as system naming conventions go, and the fact that it has a sister system called Upper Debyl makes it all the more unique. This system is located just-off the back route between the trading hubs of Amarr and Rens-Hek-Dodixie. As an aside, that route is the best way to avoid ganking hotspots such as the Niarja pipeline, and the Uedama crossroads, if you have no intention of hauling to Jita.

Lower Debyl, in the Devoid region.

At this time, our little 3-man (6, with alts) operation was running quite smoothly, we had become quite proficient at this kind of structure removal, and taking down more than one tower a night was now not uncommon for us. This night was to be yet another twin-tower bash, as I had found two targets in Lower Debyl a week or so earlier whilst hunting for MTUs. Oyl and myself had moved our ships to the system the night before and we’d docked-up in a random NPC station, shortly after I’d wardecced the POS-owning corps, so now all that was left was for Niya to make his way there just after the war went live.

With Oyl still offline, I logged-in and immediately noticed a war target in local, a pilot named Sraoshra Dallocort, who was the owner of one of the POSes we were due to bash that night. We had encountered an online target only once before, a corporation that had fuelled their POS very shortly after the war declaration, and then stayed docked-up and offline for the duration, but this time it was different.

With Niya just a couple of jumps out in his trusty Retribution, I decided to just sit tight for the time being, lest our target had some kind of elaborate and tedious station games planned. I did wonder if he actually was in a Capsule though, so I took a brief peek outside, to find him in his pod 30k from the undock, but sat on top of the station within docking range. This had to be some kind of setup, surely?

Niyalyn > going to stop 100km short and see what he is in
Pix Severus > capsule last i checked
Niyalyn > we’ll find out
Niyalyn > then again… today is a good day to die
Pix Severus > yes it is, Worf

When Niya arrived in the system, our target was flying a Succubus, a fearsome and nimble pirate frigate. So, it would seem that my earlier caution was very much warranted? Well, not quite. You see, just before Niya had arrived in system with me, Sraoshra had opened-up a private convo with me..

It would seem, then, that our war target friend had a bounty on himself, and he wanted to use the opportunity our war had given him, to try to clear it? I tried to explain the bounty mechanics to him, but all I had succeeded in doing was getting him to bring out his frigate so we could pop it. With Niya now in-system, I undocked and burned towards Sraoshra, who was yet again atop the station, this time in his frigate. A Hecate with a MWD closes the gap very fast, and I had him tackled just as Niya landed at the station. We wasted no time in exploding his ship:

Seeing this completely empty ship was the first confirmation we had gotten that he wasn’t trying to bait us into some kind of trap, so we held his capsule in position whilst I continued talking with him. 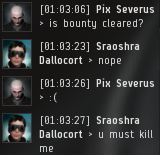 With that said, we podded him too:

I always do my best to remain polite with other pilots in New Eden, and this exchange was no exception. I expressed my sympathies that he only managed to shave off 7m ISK from his bounty, bringing it down from 55m, to 48m, and even offered him his corpse back, which he declined, so it went to Niya in the end.

Something still didn’t feel right about all of this though, and it wouldn’t be until we went to take a look at the POS that we would realise why. It would seem that Sraoshra had fuelled his POS, but had done it a little late, and his shenanigans up to this point had been his attempt at buying time for the POS bubble to regenerate!

We still had a chance though, if he hadn’t put any Strontium Clathrates in the POS, he wouldn’t be protected by a timer when his bubble went down.

Sraoshra had returned to the system after we podded him, but had now gone offline inside an NPC station, so myself and Niya got into our bashing ships and started shooting the bubble with our fingers crossed. We were still hitting the bubble when Oyl came online, and we also had quite the story to tell him, as you can imagine.

To bring down the bubble, you need to shoot the tower.

Thankfully, Sraoshra hadn’t put any Stront in the POS, meaning that we were able to take down the bubble, leaving the juicy innards for us to feast upon. Sraoshra had kept coming online during the bash, warping to it at 100km in his pod to check on it, and then warping off, so we were glad to finally be on the home stretch. We’d had enough of his shenanigans that night, and we were also pretty sure he had emptied the arrays, so we weren’t expecting any loot either.

Nothing dropped, as expected, but that was still quite the experience, so I consider it worthwile. For me, it was my first time actually shooting a bubble, and for Niya, he got a weird story to accompany his first ship kill in EVE.

That just about covers the main events surrounding my corp’s early days of POS bashing, although my memory might be a little fuzzy. I’m sure Oyl or Niya will remind me if I’ve missed anything important though! I think we did pretty well overall, considering we were just a motley crew consisting of a PvEer, a suspect baiter, and some guy who touches your stuff when you’re not looking. These nights I spent popping POSes and chatting with Niya and Oyl were some of the happiest memories I have of EVE to this day.

The next part of this series will be a collection of other smaller events that occurred during our latter POS bashing days, along with chronicling the growth of my corp, Empty You, as new members began flooding-in to take part in the action.

In a previous post, I detailed a side-activity of mine, which is to leave containers at gates in each system I have hunted in along with the simple message: “Pix Severus was here o/”. I received many mails and other such communications from capsuleers who had seen my containers, but one mail in particular created an opportunity for even more fun whilst hunting MTUs.

One night, while travelling to a market hub to offload some of the vast quantities of loot I had accumulated on my MTU hunts, I received a mail from a fellow named yellow parasol:

Another example of a standard type of mail I tend to receive from pilots who have seen my containers, I reply to all of them of course, and this one was no exception. After a little back and forth via EVE mail, where we shared some greetings and mutual encouragement, I decided to do something for this obviously-enthusiastic newbie:

This humble gesture from an MTU Hunter pleased yellow parasol very much indeed; he immediately set-off to find the can and see it for himself. After he had arrived at the can (I had moved on elsewhere to continue to hauling my loot) he sent me a follow-up mail:

I sent the ISK back, of course, with a little extra on top. I was very happy that such a simple action (anchoring a container) had created such fun times for a new player. That wasn’t to be the end of his luck with the container, however, his wallet continued to grow for some time after. It was at this point that I asked him to give me his EVE story thus far, and he obliged:

What an action-packed couple of days for this EVE newbie! He had lost ships, chatted with players, and in the end had gained a substantial amount of ISK for his efforts. New players take note: this is how you begin your EVE career.

The following day, I received yet another mail from yellow, he had taken up the sport of corpse collecting from the moment he began playing, and it seems he’d had some extra luck with this activity that day: 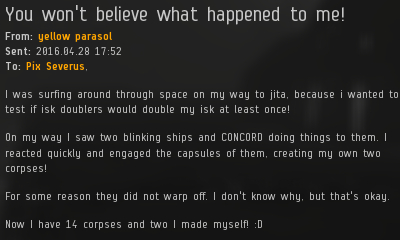 Just three days into his EVE career and he’s already popping reds at gates, what a champ. It was shortly after this mail that I decided to help broaden his EVE experience further by inviting him on an MTU hunt. Due to conflicts in schedules, it took a few days until we were both online at the same time, but the hunt did indeed go ahead eventually.

The above kill was a first for both of us, for him it was his first MTU kill, and for me it was my first non-solo MTU kill. We racked-up an impressive 8 MTU kills in total that evening, with a further 5 the following evening. By the 3rd day in his MTU Hunting career, yellow had killed his first MTU solo.

This story isn’t over, not by a long shot, but this post is becoming far too long, so stay tuned for the continuation.