A while back I created a corporation called Empty You to act as the official face of my MTU hunting operation. When I originally created the corp I didn’t hold much hope of attracting members to it, nor was I particularly interested in doing so, all I really wanted was a cool corp name to go along with my activities. After a while, however, the corp did start attracting attention, and corp invites began coming-in at a steady pace. Today, I’m happy to say my corp is home to a fine little crew of MTU hunters, POS bashers and suspect baiters. I’ll go into more detail about the formation of the corp in a later post, but for now, we have some celebrating to do. 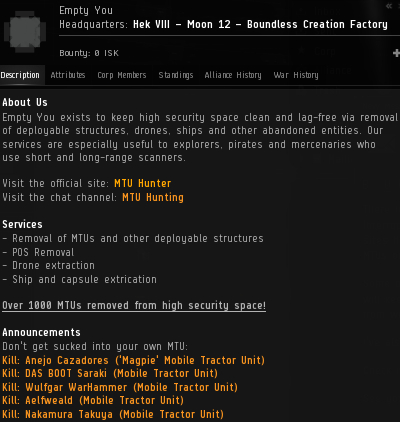 A couple of weeks ago I noticed that the corp was coming very close to achieving 1000 MTU kills, which is quite the milestone I’m sure you’ll agree. I decided that it would be fun to create a little competition in the lead-up to this target, and so I promised an ISK reward of 150m to the corp member who achieved the thousandth kill. That kill came shortly after bed time for me, and I awoke the next day to the good news.

The 1000th MTU kill for Empty You was claimed by Alexis Thunderkunt, who in-turn received the ISK reward and all the glory that came along with it; Congratulations, Alexis! It turns out that the race for the 1000th MTU actually became quite heated towards the end, with Alexis and a couple of other corp members competing directly for it. Alexis sent me this mail afterwards which goes into more detail about the events surrounding the climax to the competition.

I DID IT! (somewhat to Oyl’s chagrin… I hope he’s not mad)

And it comes with a bit of a story too.

I had been bookmarking attended MTUs for much of the night and was regretting my choice of space for this final run up to 1000. Then I found 2 lonely MTUs in one system at the same time and went for them thinking the others would be making kills any second as well. I finished my 2, and shortly after Oyl hit one. Very abruptly we were at 999! I had one bookmarked just 3 jumps out, but it was behind a mission gate and I was still blinking yellow. I decided to go for it.

After making a few safes, I warped to the gate and jumped in. I saw that someone had started the mission, and looked to have taken out all of the frigates and cruisers, but leaving the 6 Gisti battleships in the pocket. They were positioned between 80-100km, perfect range for their guns.

Expecting a killmail post in the corp chat any minute, I locked the MTU and opened fire. The little autocannons rattled-off rounds at a rapid pace, and the shields were soon dropping. Then the yellow boxes lit up from each of the Battleships. This was going to hurt. In my excitement I had aligned to the entrance gate bookmark instead of a safe. When I hit warp, Aura informed me that “Natural Phenomena are preventing…” *BLAM*! Oh shi-, first volley had just stripped my shields off. I immediately initiated a warp to a safe and jumped out just as the second volley took me deep into armor.

At a safe, I reflected on the timing of what had happened as I awaited the weapon timer so I could dock and repair. I got several good volleys off, and the shields were well on their way to breaking. I can DO this, but it’s going to be annoying.

After a quick dock and repair, I was warping back into the mission site. Once on grid with the MTU, I locked it and immediately opened fire to make every second count. As I unleashed ballistic hell on the dangerous deployable, I aligned to a safe and began drifting away from it. As soon as I was yellow boxed, warp was initiated, this time escaping without a scratch. By now the shields were half gone. Maybe 12 more trips ought to do it. But would I be fast enough? Surely the chat silence from the others was an indication of their imminent killmail.

I must have jumped in and back out again 15 times before destroying that MTU, and once more to collect the few objects that had spilled from its dank recesses. I’m sure the former owner is greatful this “harmful hoover” is no longer threatening the space of his mission and he may return at his leisure to finish what he started.

Some 10 minutes later, Oyl posted his next MTU kill. Had I sat idly by awaiting the suspect timer to jump systems, I would have watched Oyl make his kill to claim the prize. This was a fun challenge, and it seems only yesterday I was freshly aboard and we were ~850 MTUs. Looking forward to much more fun with you all.

After the goal had been achieved, I sent an extra 50m ISK to all corp members as a participation bonus, because I’m too nice. Fun times were had by all, and I’m looking forward to running more corp competitions of a similar nature in the future.

Here’s to the next thousand. Cheers.