Today we have something special for you readers, two stories from fellow MTU Hunter, Oylpann Kumamato, focused on his tireless work in educating the mission runners of New Eden about the dangers of rogue MTUs. Pour yourself a hot drink, put your feet up, and join him on two of such adventures.

The Hunt, what a name for the new expansion. I undock this afternoon in Simela and run a dscan and what do my sensors see? A ‘Packrat’ Mobile Tractor Unit, thats what.

I warp to a moon and begin my scan. At 100% I warp to the MTU. Theres a Harbinger Navy Issue sitting at 0 on the MTU and a bunch of empty wrecks. The guy doesn’t move or appear to be concerned about such a dangerous deployable sitting so close to him.

I start shooting the MTU. I get it down to about 50% hull and the Harb targets me and begins shooting! Being as he was at 0 on the MTU, I quickly change my 500m orbit to the Battlecruiser. His medium lasers aren’t tracking me at all so I remain in sharpshooter mode dealing 720dps to him. When he hits 50% shield he scoops the MTU… boo.

With him scrammed and webbed, he’s not going anywhere. He explodes:

Got his pod for good measure too:

And the MTU dropped in loot! Bonus!

The Empty You Corporation has been on red alert over the past several days.

Due to “The Hunt” Event that CCP has launched, more than ever, we have seen an increase in dangerous MTUs left out in space, clogging peoples dscans with unwanted information and just waiting to suck in unsuspecting capsuleer’s ships.

On 3/23, Tristis Puella was travelling through the system of Malma, looking for MTUs for me to destroy with extreme prejudice.  The one she found on short scan just so happened to be at a Guristas Beacon of the new event.  No probes needed for this one.

Taking a break from my trusty Hecate, I had dusted off my Ishkur of Fantastic™ that had been sitting in my hangar for far too long, and I was anxious to give it a go against some deployables, especially after the recent changes to assault frigates.

I warp to the beacon at 50km and see the MTU about 30 kilometers off.  There’s a Megathron about 60 kilometers away trying to pull range on the swarm of Guristas frigates and battleships on grid. From the looks of things, the Megathron is taking armor damage.  I have to move fast to avoid another MTU disaster.  I don’t want this guy getting sucked in to his tractor unit!  I align with the MTU and hit my afterburner bringing me up to around 1000km/s.  I quickly reach the MTU and begin to orbit closely and open up with my Small Ion Blasters, and launch a set of Warriors to help. The Mega pilot is hanging in there, slowly taking out the small frigates with drones of his own. 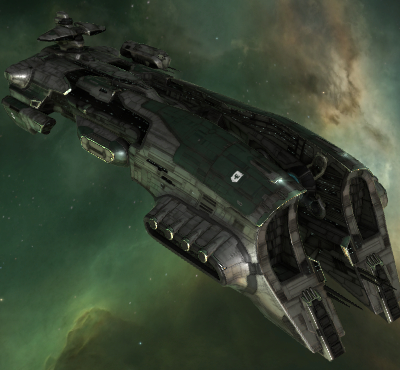 But what’s this?  He’s targetting me!  Can he not see I’m here to help?  After he takes out the final battleship, his drones begin to attack me!

At this point, I’m thinking there is no way to teach this pilot about the dangers of MTU Suckage other than letting him see for himself what can happen when an MTU gets ahold of him so I move away from the MTU and start a quick angular approach on the battleship to keep his large cannons  tracking me to a minimum. I scram the Mega once he is in range and I set an orbit of 500 meters on him so his cannons have no chance of hitting me, and start webbing and killing the Hornet drones he has loosed upon me. It was like a literal hornets nest inside that battleship.  I must have killed at least 10 before they stopped pouring out and attacking me.

With the drones gone, I concentrate my firepower on the battleship, setting my Warriors and Ion Blasters on him.  The Megathron gets to about 50% armor and starts to rep.  This isn’t good.  I fire up my small neut to try to remedy this problem.  Not knowing if he’s cap boosted or not, I hope for the best.  After a painstakingly long time he drops to about 75% hull, and then something unexpected happens.  He activates his Self Destruct! I now have 120 seconds to chew through about 5k hps of his hull. I overheat my guns and can’t help but smile as his hull disentegrates under my small guns and drone fire approximately a minute later.

Of course, my worst fear happens and the capsuleer’s wreck is sucked into the MTU he carelessly placed in space:

Remember friends, only you can prevent MTU Suckage.

Indeed! A huge thank you to Oylpann for taking the time to write his experiences down for us, and I am very sure we’ll be reading more of his stories on this blog in the near future.