In earlier posts I told the stories of my adventures with Yellow Parasol, a newcomer to EVE who hunted MTUs with me. Today, I would like to tell you the story of our final hunt together.

Whilst hunting MTUs solo one night, my hunting route took me to the system of Jaschercis. Once I had parked myself at a moon, I activated D-Scan, and what I saw next almost made my eyes pop out of my head.

‘Magpie’ Mobile Tractor Units are the most elusive of all MTU variants in highsec. How elusive you might ask? At this point in time I had around 400 MTU kills, and had only seen a Magpie on D-Scan once before, which was scooped shortly after spotting it. These MTUs are very expensive, commanding a price of over 150m ISK at the time (they’re closer to 200m now) so finding one was like hitting the jackpot, the problem now was how to go about claiming my winnings.

Before I continue with the story, I would like to clarify the differences between the various types of MTUs, which may help you understand why the prices vary (all prices are based on Jita sell orders at the time of writing this):
Mobile Tractor Unit – Standard MTU, [7.5m ISK]
‘Packrat’ Mobile Tractor Unit – More hitpoints (+5k shield + 5k armor + 10k hull), slightly harder to scan down (+100 sensor strength) [20m ISK]
‘Magpie’ Mobile Tractor Unit – Same hitpoints as standard MTU, considerably harder to scan down (+250 sensor strength) [200m ISK]
For more general information, and stats of MTUs, click here.

I immediately set about probing this thing down, only to find that I couldn’t get anywhere near a 100% scan on it, the strongest scan I could get was around 70% before I gave up. My scanning knowledge was limited, but I knew that trying to scan this thing down in a Hecate just wasn’t going to work, I needed more scan strength, a lot more, so I headed to Dodixie to see what was available. I bought myself a Heron (a frigate with bonuses to scanning) and fit a Sister’s Expanded Probe Launcher to it. I also bought myself the 6% scanning implant (AR-806), and after giving the Heron a reasonable fit, I headed back to try scanning down that Magpie again.

Moon.. parked at, probes.. deployed, scanning.. 81%. Damn! No matter how much I tried, I couldn’t get higher than 81% on the scan, even after fiddling with the position of individual probes. My scanning skills weren’t perfect, but this was like some kind of sick joke, I was so close yet so far. I tried searching online for anything that could help me probe down a Magpie, but all I found were references to a deleted video (on Google Videos, remember that?) with the information it once held long-lost to the void.

During my attempts at scanning, I had been casually chatting with Yellow in a private channel, I told him that I’d found a rare MTU which was difficult to scan, this piqued his interest and he wasted no time in flying across highsec to join me and take a look. While Yellow was making his way to me, I decided that probing this MTU down wasn’t going to work, not with my skills, it was time to use drastic measures instead. I would scan this Magpie down using a combination of D-Scan and bookmarks.

Scanning something down using D-Scan and bookmarks is the time-consuming process of attempting to warp your ship through an object’s grid (the zone/chunk of space it occupies) and placing a bookmark within it, allowing you to warp to, and occupy, the same space as the object. The size of a grid is 8000km from the centre of the object that occupies it, this might seem like a large area, but given the obscene scale of solar systems in EVE, landing a ship within this area of space is like threading a needle.

To get started with this process, you need an idea of where the object is on the solar system map, which I had, thanks to my probing work earlier. You then need to find several warp paths that allow you to place bookmarks around the approximate location of the object from several angles. Normally you can do this by flying between celestials, but the Magpie I was hunting was in the unfortunate position of being on the edge of all celestials in the system. I needed to get a bookmark from the opposite side of the Magpie from where the celestials were, but there was nothing there, no player-structures, ships, nothing.

When Yellow arrived, I briefed him on my predicament, I needed a way to warp to an area of the solar system where there was nothing to warp to. Yellow didn’t quite understand what I was trying to do at this point, but in his brilliance he suggested taking missions from agents in the system, to hopefully create a mission room in the void that I was trying to occupy. We both proceeded to annoy the hell out of the mission agents in the system, by accepting and abandoning missions over and over, until we finally found a mining mission that, once we warped to, put us in a position where I could start making bookmarks around the MTU.

I’m sorry if I’ve lost you at this point, as it is rather difficult to explain, especially to those who may have little knowledge of scanning. In the above screenshot, the Magpie’s location is the orange dot within the cube. All celestials within the system are to the right of the orange line, meaning there were no warp paths that would allow me to pass near or through the Magpie’s grid. The mission pocket we created when we accepted the mining mission allowed us to get a path from the other side of the Magpie, and from this point onward, we could get to work making bookmarks.. lots of bookmarks.

Now it was simply a case of spending the next few hours making bookmarks around the MTU, and keeping an eye on the MTU’s distance from us using D-Scan, as we inched our way closer and closer to it. The angle slider in the D-Scan window was crucial here as it allowed us to see if we were too far above or below the target, Yellow had a much better grasp of this mechanic than I did, and his work helped shave-off hours of frustrating work. He also shared this video of a Magpie with me, which helped break the monotony of staring at bookmarks: Magpie Hangs Upside Down.

I wasn’t kidding when I said a LOT of bookmarks.

After creating a vast web of bookmarks (over 120 of them!), finding ourselves within 30k of the Magpie, I warped between 2 new bookmarks and saw a magical sight, the MTU appeared on my overview for a split-second! Now all I had to do was spam CTRL+B along this path until I landed a bookmark within the Magpie’s grid. Which I did. When I landed on this bookmark, I found myself a few thousand kilometers from the MTU within it’s grid and started burning towards it, before realising that I could just warp to 0 on the MTU. I also forgot that I was still in the Heron and didn’t have any guns to shoot the thing with, so after having Yellow warp to me via the fleet window, I reshipped into a Svipul and headed back. 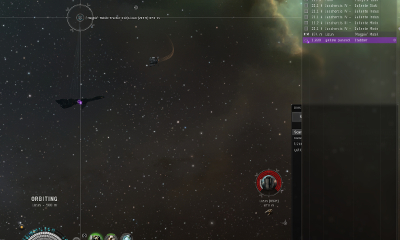 With our combined Minmatar firepower (Yellow was in a Stabber) we made short work of the Magpie.

The MTU was empty, but we really didn’t care, we had just pulled-off quite the feat together. This was a first for both of us, and for me personally, I considered it my graduation from the ranks of being just your average MTU Hunter. An evening well spent indeed.

Since this kill, I have had just 2 more Magpie kills, here they are for your perusal:

It wasn’t until I had found my second Magpie almost a year later, that I realised I could have saved all of that effort by simply buying an Astero, which gives just enough scanning strength combined with a Sister’s launcher and probes, to nail 100% on a Magpie scan (with some probe fiddling). If I could go back, I wouldn’t want to change the experience I had by doing it the hard way, and if you’re into scanning at all, I would encourage you to give this method a try sometime, for the challenge.

Chronologically, we have reached the end of my journey with Yellow Parasol, however, there are a few more stories to share about our (mostly his) various shenanigans, which I’ll get around to in a future post.

5 thoughts on “The Magpie”