One night, on a typical hunt through the Domain region, I stumbled upon a system that has since become very special to me. The short time I spent in this system would prove my dedication to the pursuit of total MTU annihilation, and would also give me an experience that I consider far more valuable than ISK and spaceships. 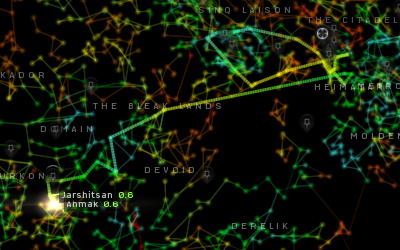 Upon entering the system of Ahmak, I immediately found an MTU on D-Scan and set to work on scanning it down. I was on a high because in the previous system, Jarshitsan, I had just popped an MTU which contained the wreck of a mission runner’s battleship (a phenomenon covered in an earlier post). The kill was worth 150m, of which 125m dropped for me.

I scanned down the MTU in Ahmak and warped to it, only to find that it was surrounded by mission rats, in the first room of the level 4 mission, Worlds Collide. I couldn’t get near the MTU without being aggroed by the rats, and my T3 Destroyer was certainly not fit appropriately to take them on. I had no choice, then, but to call for assistance.

The Raven Navy Issue. The heavyweight boxer of EVE ships, strong as hell, but a little on the slow side.

That assistance would come in the form of my mission runner alt who, at the time, used a Raven Navy Issue (RNI) for running level 4 missions in Lanngisi and the surrounding systems. The RNI is a powerful missile-based Caldari Faction Battleship, however, it is also extremely slow in regards to the time it takes to align to something (like a stargate), and it’s warp speed. So when I realised I would have to take this slow, expensive boat 26 jumps through empire space, to kill some rats on the other side of highsec just so I could pop an MTU, I initially balked at the prospect.

However, I couldn’t let a single MTU slip through my fingers if I was to prove my dedication to this pursuit. I had to follow it through, even if it meant spending half an hour of my limited free time doing something tedious. So I undocked the battleship, set course for Ahmak, and began the long journey there.

When my mission runner finally reached Ahmak, I docked her up at the only station in the system, made a copy of the MTU bookmark, and traded it to her. I then sent her to the MTU’s location to take care of the mission rats. Whilst the rats around the MTU were being disposed of, I sent Pix to take care of the MTU itself. I also entered the other rooms inside the mission to check for faction spawns, and unfortunately there were none this time. The MTU popped just like any other, and was filled with the standard mission loot that the majority of MTUs tend to contain. I had hoped this one would be filled with the wreck of the mission runner herself, but alas, not this time.

Still, a kill is a kill.. is a kill. Would I have spent all the effort on taking this MTU down had I known it’s contents beforehand? Certainly. However, I probably would have tried using my alt to pull the rats from the MTU in a fast frigate instead of taking a battleship to kill them!

The story doesn’t quite end there though. Shortly after popping the MTU, I hauled the loot back to the station and took a well-deserved break. In the meantime, some of the residents of Ahmak had piped-up in local chat, presumably after seeing me go suspect for attacking the MTU..

3 thoughts on “Dedication of an MTU Hunter”