One thing I have noticed during my travels throughout highsec space is just how quiet it is, there could be over 100 people in local, and not a single word is uttered between those players. This makes me sad, so I like to encourage discourse where possible.

So when I saw someone trying, in vain, to talk to someone who had blocked them, I just had to intervene.


Some EVE players can be pretty mean, and will call you names for not understanding every mechanic in the game. 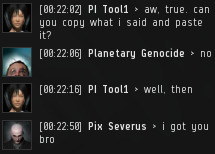 As you can see, I didn’t have the full conversation screenshotted.

After this, my wallet flashed with the addition of 5m ISK, not a bad payment for a little copy and paste work.

There you have it, proof that talking in local can quite literally pay-off.

Next up is a different conversation in local that was sparked due to me docking at a station at the same time as another player, whilst under suspect status.

Notice how I didn’t call him a retard for thinking that being under a suspect timer meant I was hunting him.

A player who isn’t afraid to ask questions will go far in EVE.

One simple question in local resulted in a pleasant chat with fellow players.